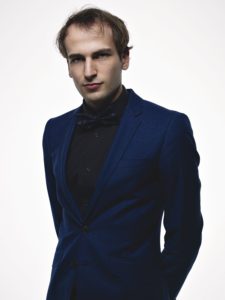 Lauded for ‘delicate yet virtuosic’ playing (BBC Music Magazine) and ‘seamless subtleties of tone colour’ with ‘plenty of edge’ (The Strad), Swiss-French-German cellist Christoph Croisé is quickly building an international reputation as one of the most captivating young concert soloists to emerge in recent years.

At the age of 17, he made his New York debut at Carnegie Hall, where he has performed on several occasions since. He also appears regularly in further world-renowned concert halls including the Tonhalle Zurich, the Berliner Philharmonie, the Wigmore Hall London, the Vienna Konzerthaus, the Residenz Munich, the Capella St. Petersburg, the Philharmonia St. Petersburg and the State Philharmonia Baku.

Several of his concerts, such as the Schumann concerto with the Munich Radio Orchestra, have been broadcast live on radio and television by the Bavarian Radio, the Norddeutscher Rundfunk, WQXR, BBC, RTS, RSI, SRF, WMFT and others.

Christoph is often involved in baroque projects as a complement to modern performance. He has worked extensively in the field, performing as soloist with the “Il Pomo d’Oro” baroque orchestra and working with Maurice Steger and Nicolas Altstaedt. In 2020 and 2021 he released a CD and video of the complete set of Viola da Gamba sonatas and the six Cello Suites by J. S. Bach with a 1720 Guarneri ‘Filius Andrea’ baroque cello.

Aside from performing, Christoph is passionate about helping young cellists develop as musicians and has given international masterclasses in prestigious venues such as the St. Petersburg Conservatory, the “Festival of young European soloists” of El Sistema in Venezuela and the “Masterclass de Musica“ in Granada/Spain.

In addition, Christoph composes his own pieces, of which he expresses his emotions and ideas influenced by different styles, from baroque and classical to Jazz and electronic music.

Christoph Croisé is the artistic director of the Niederlenzer Musiktage, a classical and electronic music festival, which takes place every year at the end of May in Switzerland.

Christoph Croisé is very thankful for the multiple scholarships granted to him over the last past years by the Lyra Foundation.